Q: What makes abortion sinful? Shouldn’t the woman have the right to choose what happens to her body?

A: Abortion, as the conscious, planned termination of a developing human in the womb, is as murder.

Abortion, as such, is not explicitly mentioned in Scripture. Abortion is explicitly condemned in the Didache, a first century Christian exhortation (Didache 2); ancient pagan Romans were more likely to just expose unwanted children after birth, and Christians became well-known for adopting such children.

The Biblical case for abortion as sinful is based on two strong Biblical principles: the humanity of a developing embryo/fetus in utero and the condemnation of taking of the lives of others.

Esau and Jacob fought each other while in the womb, and even then are reckoned as “sons” or children (Genesis 25:22). David speaks of God having formed his parts in the womb (Psalm 139:13); Isaiah would echo the claim, indicating its standing as proverbial in Israel (Isaiah 44:2, 24). God knew Jeremiah from before he entered the womb and made him holy before he came forth from the womb (Jeremiah 1:5). Luke makes special note of how John the Baptist leapt in the womb for joy at hearing Mary’s voice (in the sixth month of pregnancy; Luke 1:41, 44). From these statements we affirm that humans do not obtain their standing as humans only after birth, but are reckoned as distinctly human even within the womb.

There is much dispute about precisely when an embryo or fetus becomes human, but all necessary elements are present once the zygote is implanted in the uterine wall. The sperm and the egg have become one, connected and nourished by its mother; thus after the point of implantation, any conscious, deliberate attempt to terminate the pregnancy is to kill the life of the embryo or fetus. 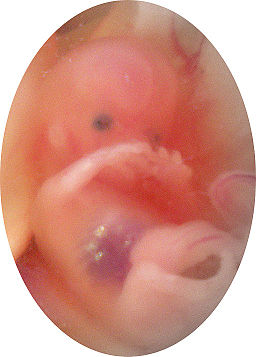 Such killing of life is seen as murder in Scripture. Under the Law of Moses, if a man struck a pregnant woman, he would have to pay equal restitution, even unto life for life (Exodus 21:22-25). Paul condemned Greco-Roman pagan culture for, among other things, being full of murder, and having no natural affection (Romans 1:28-31). In Roman culture every child born in a household would be set before the head of the house (the paterfamilias). If the paterfamilias picked up the child, he indicated his acceptance and approval of the child, and s/he became part of the household. If he did not pick up the child, he indicated his rejection of the child (be it for deformity, excess, jealousy, or whatever other reason), and the child would be left exposed somewhere to die. As noted above, such was strongly condemned by Christians, who adopted many such rejected children.

In modern culture abortion is first justified by attempting to de-humanize the child by speaking of an embryo or a fetus and using clinical terms like termination. Abortion historically was justified by the view that a child was not “quickened” with a soul until the second trimester or so, and therefore beforehand the child was not really human. Scientific arguments also attempt to appeal to “viability” and concerns about birth defects, all of which boil down to a utilitarian philosophy. As we have seen, once the fertilized egg has implanted, time and nourishment are all it needs to develop into a human being. There remains a storm of controversy about the ethics of selective abortion on the basis of possible birth defects. The specter of eugenics rightfully overshadows any such discussion; furthermore, who has given man the right to make such decisions over life and death? What if the child actually has no birth defects? And what makes a child with birth defects less worthy of life?

The second, and perhaps more forceful, argument made to justify abortion is the right of a woman over her body. In this view it is claimed that only the woman should have the right to decide whether to carry a baby to term or to abort it; it should not be a decision imposed upon her from another source. It is from this that the pro-abortion argument speaks of being “pro-choice.”

While it is true that women ought to have a strong measure of autonomy over their bodies, such “pro-choice” arguments do not factor in the personhood of the child being carried in that womb. The free exercise of “choice” by the mother to have an abortion is the elimination of the child’s “choice” to continue to live, develop, and grow in the womb! The moment a woman becomes pregnant her body, while her own in many respects, also must now give thought to the child within her, and in that sense is not fully her own. Such remains a fact of life in this creation no matter how inconvenient it is for the position of many feminists.

The area of choice is primarily in the sphere of sexual intercourse. Under most circumstances women have elected to participate in sexual intercourse; the potential for procreation exists whenever that particular choice is made. If a woman does not want to give up her autonomy in any way, then she is free to elect to not participate in sexual intercourse. There are situations in which women did not exercise that choice, but had it imposed upon them through assault and rape. We abhor such terrible behaviors and sympathize with the trials of the woman. Yet is it not possible that termination of the pregnancy in such a situation is imposing trauma upon trauma? A woman who has been made pregnant as a result of sexual assault is going to suffer greatly no matter what decision is made; there is no justification to believe that an abortion will make it “better” than carrying a child to term and either raising the child or giving up the child for adoption.

Perhaps the greatest challenge regarding the issue of abortion is our culture’s view of children. In the Bible children are reckoned as blessings, the hope of a future on earth, and the means by which a person will be taken care of and sustained in old age (Psalm 128:1-6, 1 Timothy 5:3-16). Today, unfortunately, children are seen as hindrances. People are led to believe that their lives are all about them and their advancement as they desire; children just take a lot of time, effort, and resources, and “keep back” a person from developing in education or social standing. People expect themselves or government programs to take care of them in their old age.

We should not be surprised, therefore, when most abortions take place because the prospective parents feel that they are not able to provide for the child, do not feel ready to parent, or fear being “held back” from accomplishing life goals. Such people really have elevated personal freedom/satisfaction/fulfillment, work/career/fame/success, or personal autonomy as their gods, made more important than the sacred bond of family. God has given us all things, and we are to be thankful for His blessings, and bless in turn. Children are one means by which we do so, and the main means by which we learn how to embody sacrificial love and devotion. A culture of abortion is not a culture honoring the gift of life, and a culture which idolizes the autonomy of the individual is not long for this harsh, cruel, and unforgiving world. The way forward is the way of life, of care for one another, and elevation of the needs of others over our own.

Do you have questions about the Bible or Christianity? We’d love to discuss them!

Would you like to add anything to the answer? Let us know in the comments below.

← Q&A: Jesus and the Old Testament
Acts of the Apostles →

This site uses Akismet to reduce spam. Learn how your comment data is processed.